An Evening with Lamp and Friends 2020

Lamp (Leicestershire action for Mental Health Project) organised an online concert and award with the help of Martin Cullen of Rockstar Promotions and gave out five gongs for kindness, including ‘Kindness in the community’ and ‘Kindness in the workplace’.
An Evening with Lamp & Friends was arranged by the charity after realising they would not be able to hold their annual gala dinner, which last year raised around £30,000.

The lack of event fundraising would be a blow and the team felt they couldn’t raise the same amount via an online event, but came to the realization that they still needed to celebrate the wonderful sense of community across Leicester, Leicestershire and Rutland.
CEO Sue Langley said: “It’s been a tough year for Lamp but we have been astounded by the many acts of kindness that have come our way, through partnership working, pro bono offers and fundraising initiatives so we wanted to say thank you and have at least some sort of get together.”

Businesses from across Leicester attended, with many bagging awards for their charity work and effort in supporting the charity during a tough year.

“It was a real pleasure to attend the awards night and see such great artists give up their time for LAMP and all their hard work to raise awareness of mental health stigma and advocacy – music, poems and a beautiful story. I was absolutely bowled over to be presented with an award for kindness in the community and still can’t quite believe it. Reaching People is about partnership for lasting change and its critical to have LAMP as a member and partner working alongside other local community and voluntary organisations to create collective holistic solutions for people with most need.”  Jenny Hand CEO Reaching People.

The online zoom event included 6 Acts, from comedy poet Rob Gee to Britain’s Got Talent contestant Lorraine Bowen who gave everyone a much needed giggle with her Crumble Song. Hinckley based music duo Echo Bay closed the night with an incredible ‘Mental Health Messenger’ music video which they created in response to the mental health crisis so many people face as a result of the pandemic.

Lamp has seen calls to its helplines increase by 400% since March and its team of advocates has recorded the highest ever number of calls from those with suicidal feelings. The charity was forced to offer much of its services via phone and video call at the height of lockdown measures and launched a digital wellbeing campaign offering tips and advice online.

Sue Langley adds: “Our online wellbeing tips have seen huge engagement and Lamp’s website traffic has increased by more than 20%. This shows us we are finding new ways of connecting with those who need us, as does the success of our online event. It proved that we all need to see each other laugh and smile and to take time to appreciate each other, say thank you and find ways to share joy. A big thank you to the performers and to Rockstar Promotions who gave their time to produce the event.

“Lamp is dealing with some of the most complex mental health cases we have ever been contacted about, as the pandemic affects our lives in so many different ways. But it’s important to say that we are here and we can help. We encourage anyone who has mental health symptoms to talk and to seek help.”

Following the success of the online Evening with Lamp & Friends, the charity is now looking forward to planning new ways to help raise much needed funds. 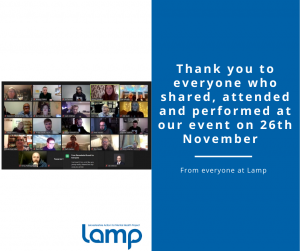