The event was a thank you to those individuals and businesses who supported the charity during 2021. Sponsors included Mattioli Woods, Hinckley & Rugby Building Society, Hastings Direct and Tokio Marine HCC.

It was attended by around 60 guests including community fundraisers, Lamp Business Club members and general supporters, and raised funds to help Lamp support people with access to mental health services.

Local poet and patron of Lamp, Rob Gee, wrote a poem for the event called “Acts of Kindness” which can be read here.

Following an afternoon tea, a silent auction, and the chance to meet members of the team and hear about the work that the charity does, the awards ceremony got underway with awards presented to the following people: 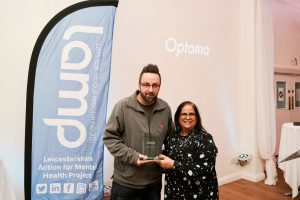 ‘Pete always goes above and beyond to support local charities and communities, as well as being an integral man of kindness in the business world. He is always keen to support charity events, either with attendance or offering his photography skills to benefit charities such as Lamp and Focus.’

Commenting on what it means to have won an Acts of Kindness award, Pete Martin from Pete Martin Photography said:

“Firstly, to actually be nominated was not only a surprise, but a huge honour. There were also three other amazing nominees, one of them a good friend of mine. When I heard my name called out, I actually thought it was a mistake! I thought, I just do what I do, and what feels and comes naturally to me. So to be recognised and acknowledged for that is a wonderful thing. I look forward to working alongside Lamp in the future, seeing where this journey takes ‘us’ and what else can be achieved.” 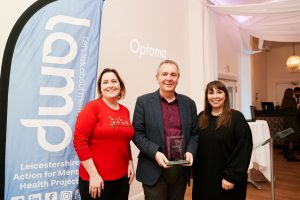 ‘Hinckley & Rugby Building Society were an integral part of the success of the Lamp 5k campaign. Not only did they sponsor the event, they were keen to be actively involved from start to finish and contributed a number of factors that raised the profile of Lamp, mental health awareness and the event itself. So much so, the 5k won a community champion award. Colin Fyfe has also been a real asset to Lamp by chairing the Lamp Business Club which has grown and developed with the aim to bring together local businesses thinking about how to better mental health in the workplace. The club now has 55 members since it first came together in March 2020.’

“I was thrilled and humbled to receive the award for Acts of Kindness in the Workplace. Lamp provides such a valuable service for local people and businesses that when I was given the opportunity to become more involved with the charity, through my work at Hinckley & Rugby Building Society, I jumped at the chance! Getting to know the team over the last year, and seeing their passion and commitment, as well as hearing the stories of those who have benefitted from Lamp’s advocacy, has fuelled my determination to support their mission and help them to raise their profile locally. To be recognised with an award for doing that was completely unexpected and a very special moment for me.” 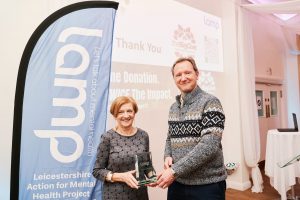 ‘Kath has been an absolute asset to Lamp during the year, providing much needed support on the reporting element on the charity’s accounts. She has attended and supported every Lamp campaign and even raised over £400 during Lamp’s 5k. Not only has she offered her free time to support Lamp, she has also devoted a lot of her time to the Community Christ Church in Leicester (known as the Little Blue Church).’

“His (Ted’s) knowledge, teachings and wisdom over the years have helped me to become a very strong, independent woman. He has never given up on me. He helps so many vulnerable people in Loughborough. He continues to help and support me by phone every day and has done this for 16 years, even though he has a mental health disorder himself and a very busy life.”

“It was wonderful to be able to welcome people to this event, reflect on the support that we’ve received in this most difficult of years and give our thanks. We truly appreciate the donations and support that we receive which enable our team to make a difference to people who need help with their mental health advocacy. We wanted to show how grateful we are to all of our supporters and the awards were a small way of acknowledging those who really went above and beyond.”

Thanks to Pete Martin Photography for images of the event.