Time to Talk Day is part of a nationwide campaign to get people talking more openly about mental health and it took place on 3 February 2022.

This year, staff at Natwest’s Birmingham and Leicester branches got involved in fundraising to support the mental health charity, Leicestershire Action for Mental Health Project (Lamp). Kay Chauhan, a Chartered Personal Banker with Natwest’s Birmingham branch, which ran a steps challenge, said, “We chose to fundraise on Time to Talk Day as it enabled us to raise awareness of mental wellbeing within the bank. The steps challenge was a reminder for us to look out for our physical wellbeing – when you’re in the branch you are tucked away in the office and can forget to take a breather by going out to get some fresh air and taking a walk.

“On the day, our colleagues from various branches walked to and from work. They could also take an extra 5 to 10 minutes during their lunch breaks to get more steps in. We had raffles for a hamper, held an auction to bid for an extra day’s holiday, cake sales and a general donation drive.”

The bank’s team geared up for their challenge by wearing unique TALK t-shirts which were designed for our TALK campaign. These were printed with words such as ‘sad’, ‘lonely’ and ‘worry’, highlighting different feelings associated with poor mental health and the importance of talking openly about them. The t-shirts were used as a way to promote Lamp’s work in mental health advocacy, which empowers people to speak up. 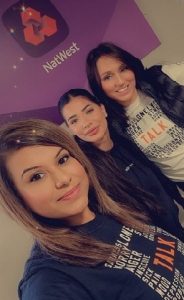 Kay and her colleagues wear the TALK t-shirts designed by The Funk Academy.

The bank drummed up donations from its clients and customers and while its £500 target has been met and exceeded, fundraising is still underway. You can still make a donation to Natwest Bank’s Time to Talk Day here. All proceeds from the fundraiser will be donated to Lamp.

On that occasion, The Funk Academy designed eye-catching t-shirts with key messages that highlighted the importance of talking when dealing with tough times. The t-shirts were then sold to generate funds for Lamp.

Jit Parmar, the owner of The Funk Academy, had approached Lamp and expressed his wish to design a t-shirt to raise awareness of suicide prevention and mental health issues, whilst also raising money and enhancing awareness of Lamp’s services at the same time. Having struggled with his own mental health in the past, Jit hoped that as people walked around Leicestershire they would see the ‘TALK’ message on the t-shirts and it would stay on their minds. He explained, “If we could encourage just one person who felt suicidal to talk about their problems, then we could save them and avoid the heartbreak that comes with the loss of a life for their families and loved ones.”

Lamp went on to highlight the t-shirts again during the Shine a Light Campaign which ran from September to October 2021.

Matt Barton, Lamp’s Corporate and Community Engagement Officer said, “The t-shirts with the word ‘Talk’, surrounded by frequently-felt, low feelings were perfect for raising awareness on national Time to Talk Day. We all need to encourage people to talk and share how they feel. This doesn’t just remove the stigma associated with mental health conditions, it also highlights the importance of having a conversation, which in some instances, is vital for suicide prevention.

“We are so grateful to Jit at The Funk Academy for creating the TALK campaign and also thankful to Natwest for further highlighting the t-shirts/TALK campaign, whilst raising awareness of mental health and all their fundraising efforts for Lamp.”