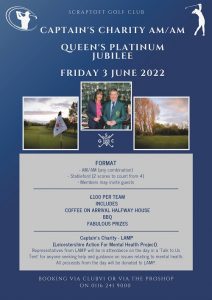 The flagship event is the highlight in the club’s schedule of fundraisers this year where Lamp has been selected to receive the club’s support.

In the run-up to the 3 June charity golf tournament, the club held a series of events in aid of Lamp, including a ladies golf open at the end of April, where lady golfers from other clubs came together to compete. The tournament, along with a donation made by a golf apparel company, raised over £200 for the charity. In addition, the club has gathered other donations which have currently raised a total of £1,460 for Lamp. The club’s members have also taken the cause to heart and participated in Lamp’s Trip to the Moon 5k fundraiser to further support the charity.

“We are looking forward to the Platinum Jubilee competition which promises to be a fun-filled event for our members, friends, and supporters. We have a packed schedule on the day, with the competition starting at 9.30am. The team competition will include various challenges on some holes including nearest the pin, nearest the gin, straightest drive and hit the green, with some great prizes to be won. The day’s festivities will include food and drinks, a raffle, and the chance to bid for various golf rounds at some prestigious clubs. All the proceeds from the day will be donated to Lamp.”

“After seeing how much Lamp does within the community and witnessing firsthand the powerful impact of the charity’s work with families and individuals, we’re certain that golfers will get into the spirit of the cause to strengthen our fundraising efforts.”

“We are excited about the upcoming Queen’s Platinum Jubilee tournament and I’m certain that it will be a thoroughly wonderful event! With the donations raised and the club’s ongoing support, Lamp will be able to continue providing mental health advocacy to those in need throughout Leicestershire. We look forward to building on the success of this year’s event.”

If you’re attending the competition, look out for Lamp’s Talk to Us Tent where you can drop by and discuss any issues around mental health.